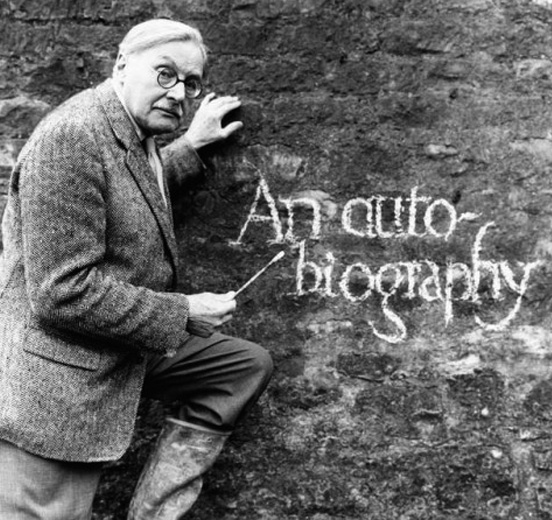 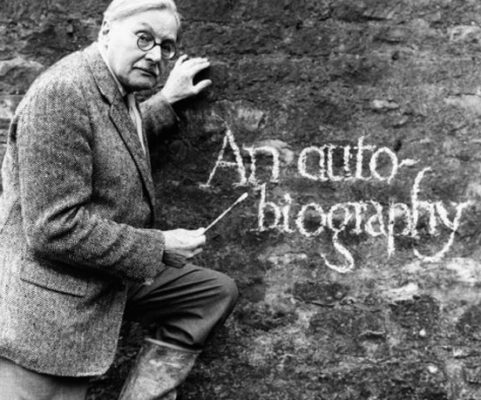 The renowned furniture making company founded by Sir Gordon Russell, had its roots in the Lygon Arms, an old coaching inn in Broadway, which his father Sydney Bolton Russell purchased in 1904.

Gordon was born in 1892 and went to school in nearby Chipping Campden Leaving aged 16, his father suggested that he should work in a small joinery shop set up by his father to restore and repair antique furniture for furnishing the Inn`s existing and new rooms. The experience working alongside skilled craftsmen led to an increasing interest in furniture design and the Arts & Crafts Movement.

Both Gordon and his father were aware of the nearby workshops in Campden of The Guild of Handicraft led by a pioneer of the movement, C.R.Ashbee. Such was Gordon`s interest, that prior to the First World War he began to design a number of pieces. At the outbreak of the War both he and his brother, Don, volunteered for the Worcestershire Regiment and served with distinction throughout the war in France, surviving many of the horrific battles, including Passendale, Ypres and the Somme.

Returning in 1918 Gordon, having witnessed so much destruction, was determined to create work that would be valued by future generations. With his father`s support, together they set up Russell and Sons in 1922 – an enterprise that eventually would become known world wide. The history of the workshops can be divided into five clear, and significant periods of development. 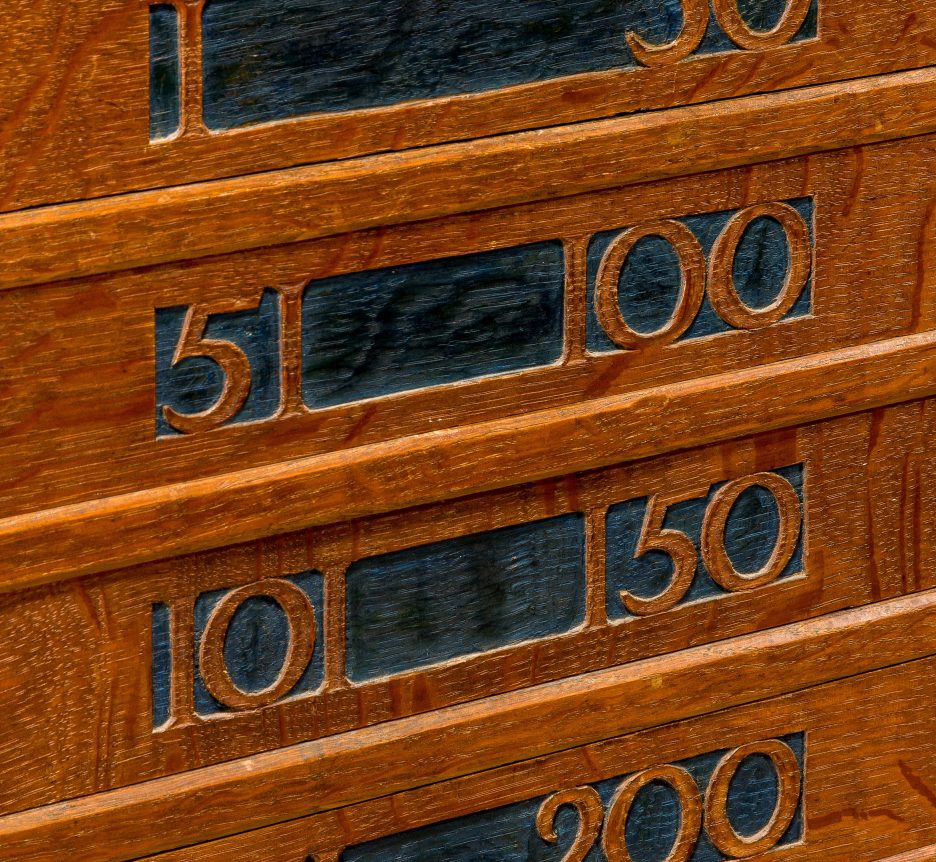 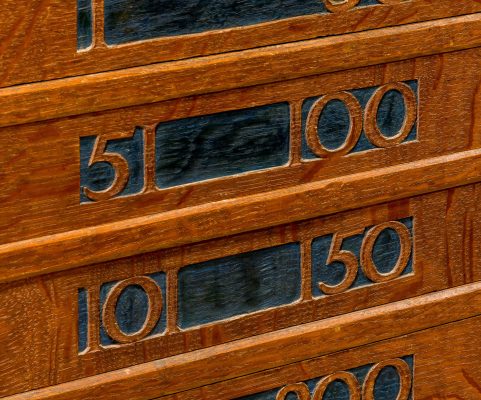 At the time Gordon embarked on `The Broadway Adventure` as he termed it, he clearly supported the philosophy of the Arts & Crafts Movement in terms of working conditions, housing, education, design and craftsmanship.

The leading pioneers of the Movement were by and large architects – Ashbee, Lutyens, Gimson, Voysey – Gordon never had that opportunity. He was self taught through reading and observation of traditional skills. In one very important respect his views differed from the Movement, as he strongly believed in a blend of hand and machine as a way of making affordable furniture for the “decent, ordinary man”.

Gordon`s commitment to apprenticeship was another factor in achieving his objectives – in just eight years he created a business employing 100 craftsmen and management. Even more remarkable was Gordon`s achievement as a designer of furniture, metalwork and glass – work of the highest quality and craftsmanship. Over the same period he designed over 1,000 products beautifully drawn in their own right. The entire collection is now held by the Museum.

Essentially a `one man` business, Gordon`s achievement were recognised both at home and abroad, and regularly featured in the Studio magazine. He had by now opened his first shop in 1929 in Wigmore Street, London. 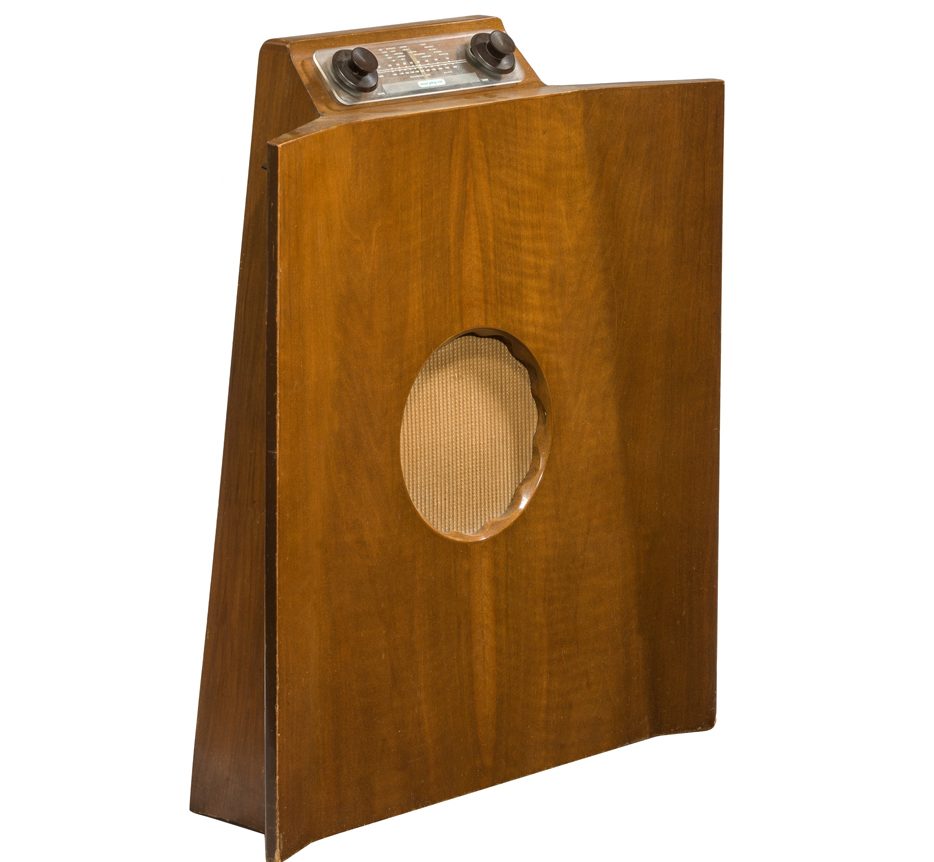 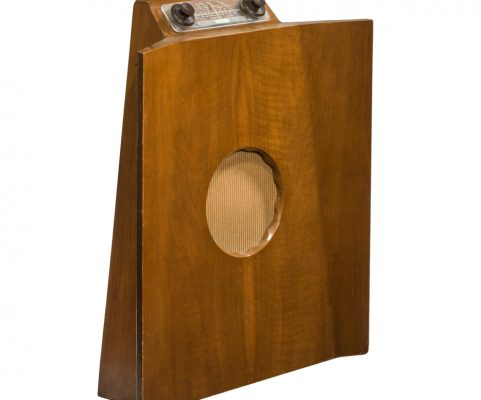 In many ways the most challenging period. On the face of it, with a growing reputation, all seemed to be going well, but dark clouds were on the horizon with the great economic depression of the thirties.

Gordon recognised that firstly, there was a changing market in terms of design. New ideas were sweeping in from Germany and Scandinavia. Ever pragmatic, Gordon had already suggested that his youngest brother, Dick, should train as an Architect. Once qualified he returned to Broadway, at which point Gordon relinquished his role as the Designer, passing the mantle to Dick and a team of designers including David Booth, `Curly` Russell (no relation) who had worked with Gordon for a number of years, and Eden Minns who had trained with Dick.

The firm, whilst embarking on a more modernist approach, was struggling fundamentally in the increasingly depressed markets. The shop in London had closed and the future seemed bleak until a remarkable saviour appeared in the form of the Murphy Radio Company. Gordon records that in 1930 he received a call from a Frank Murphy who said “ I am an engineer making radio sets and for some time have admired your furniture – would you like to design and make cabinets for me?”

Gordon saw this as a challenge and an opportunity. It was to be a remarkable story, as over the next ten years Dick Russell and Eden Minns designed over 70 radio sets, gramophones and televisions – for some reason during the depression radios flourished.

By 1939 the firm was employing close to 1,000 employees, the majority engaged in Murphy production in a newly built factory at Park Royal, London. A new and larger shop had opened again in Wigmore Street offering a much wider, affordable range of merchandise including curtains, carpets, rugs and china. Many of the soft furnishings were designed by Marian Pepler, a fellow student of Dick`s at the AA School of Architecture, and now married to him.

Another major influence on the firm`s strategy was Nikolaus Pevsner who joined the firm in 1935 as a buyer! He was a refugee from Nazi Germany and brought to bear a wide knowledge of design.

The firm was now a leader in the field of design, working both in the retail markets along with the furnishing of hotels, colleges and offices. The success was to be short lived, as in 1939 Britain declared war on Germany, and all furniture production ceased and turned to wartime contracts.
Note: It is this period 1930 – 80 which is the subject of a book to be published shortly by Ray Leigh. 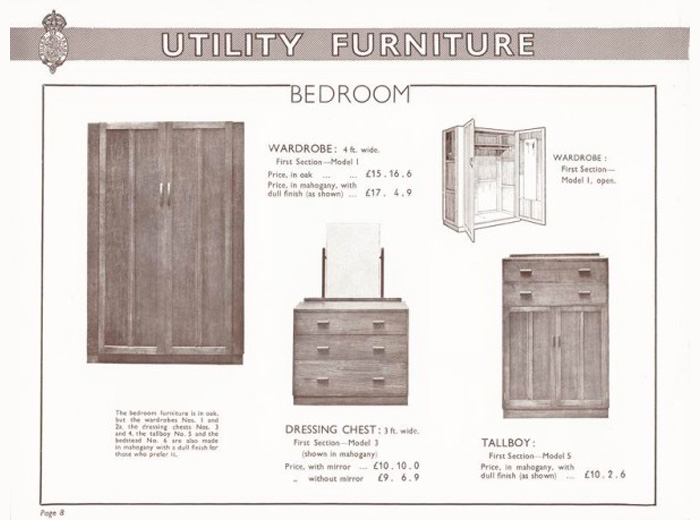 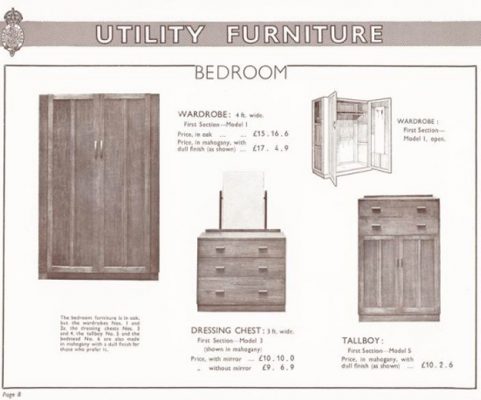 The war inevitably made great demands on the Company. Firstly, many men left to join the forces, and in common with all the major furniture manufacturers production switched to the needs of the forces. In the case of Gordon Russell it involved aircraft recognition models for the Observation Corps, prototype aircraft parts, and latterly sections of the Mosquito bomber, where the firm`s experience of laminated radio cabinets was very beneficial. Mention should be made of the part played by women who joined the workshops and became highly skilled.

During November 1940 the factory was hit by incendiary bombs dropped across Broadway by, it is said, a stray bomber being pursued by RAF night fighters. A very fine thatched mediaeval barn was lost – ironically it was being used to store materials- fabrics, rugs and records transferred from the London showroom for safety but which escaped any damage!

Gordon played a major public role throughout the war. He was appointed by the Government to lead the design panel set up to manufacture utility furniture CC41 The challenge was to find literally hundreds of small workshops able to design a range of standard furniture to meet the needs of those who had lost their homes through bombing, or were newly married.  Although materials were in short supply, Gordon ensured that the furniture was well designed and well made – much of it remains in use to this day. In recognition of his contribution Gordon was awarded a CBE

In 1944 Gordon was invited to join Board of Trade discussions to set up a national body to promote higher standards of industrial design. This would lead to a new and significant role in the post war years. 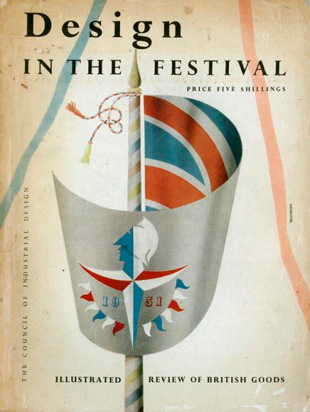 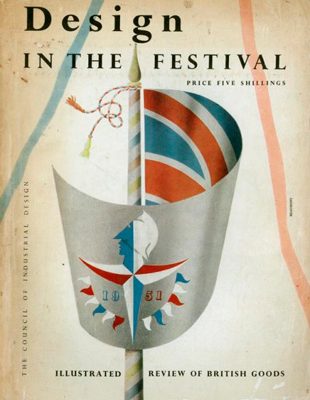 The end of the war saw a return to normal production in Broadway. The restrictions that had been imposed on the use of materials was eased, which enabled new designs to be introduced. With Gordon now committed to public service and spending much of his time in London, the workshops were effectively being run by Dick Bee and Ted Ould, both pre-war Directors. The design and drawing office was under the direction of `Curly` Russell. with Dick Russell, now running his own design practice in London, acting as consultant from time to time on specific projects.  Dick Russell would shortly be appointed Professor as head of the School of Wood, Metal & Plastics at the Royal College of Art.

Whilst Gordon was Chairman, his involvement in Government projects was taking he greater part of his time. The Council of Industrial Design had been launched in 1944.  In 1946 Gordon was heavily involved in an exhibition to promote British Design –`Britain Can Make It` – hugely successful with an attendance of one and a half million people.
In 1955 Gordon was awarded a Knighthood in recognition of his services to Design and Industry.

The Festival of Britain in 1951 on the South bank of the Thames was without doubt one of the most exciting events to be held in post war Britain. In a war torn London the Exhibition celebrated the heritage of Britain and the way forward to new challenges. Gordon, as a member of the Council of Industrial Design, was heavily involved in the content and selection processes.

The following year the Design Centre was opened in London. With Gordon as the Director, the Centre was a tremendous success in promoting British design world wide. It was, over the years, to become a mecca for design for the general public, designers and manufacturers alike.

Following his retirement in 1959, Gordon took a more active interest in the work of the Company, at the same time setting up his own consultancy. Retirement also enabled him to return to Kingcombe and to continue to complete the house and garden – a project that had been his passion since 1925. 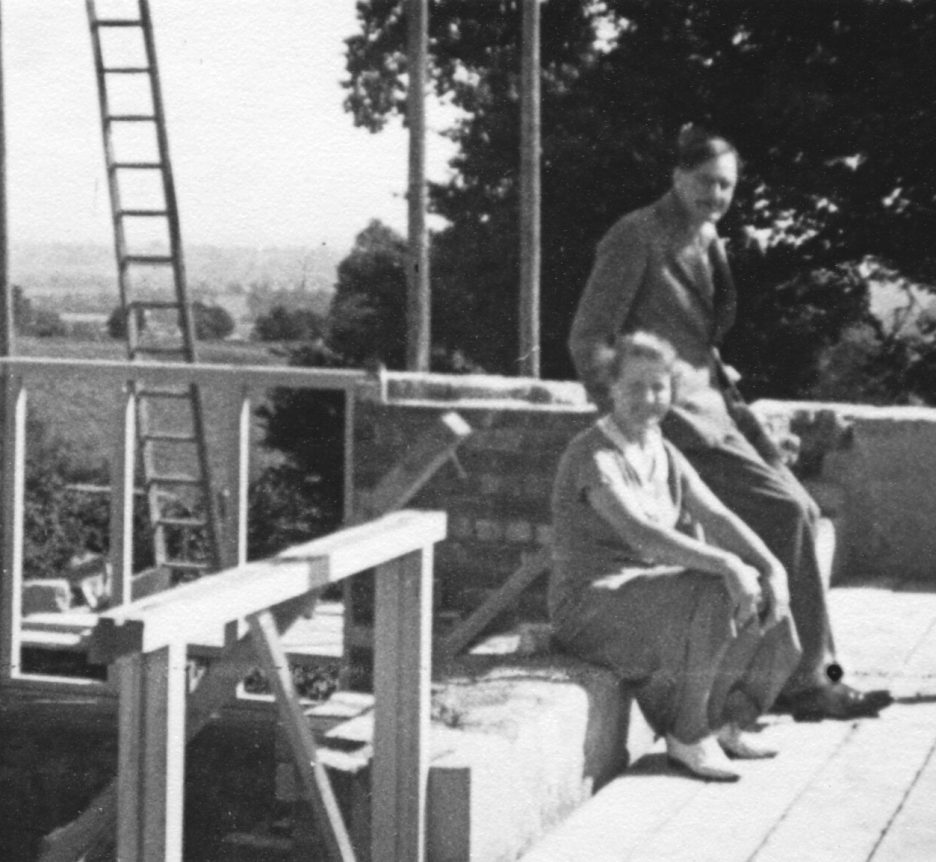 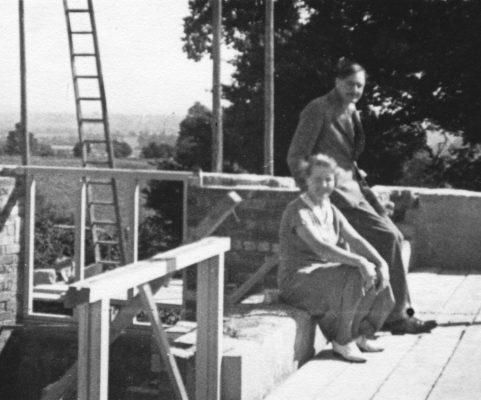 1968 signalled changes – many of those who had been with Gordon Russell since the earliest days were approaching retirement. They included E.T. (Ted) Ould and W (Bill) Ould the two managing directors along with, W.H (Curly) Russell, the Chief Designer, the head of sales, Val Freeman, and the works manager, Adriaan Hermsen, together with many other key managers.

In 1967 the Board decided to appoint a Design Director. Ray Leigh, an architect in partnership with Dick Russell was invited to join the firm as Dick was about to retire. Ray had worked closely with the firm for many years and accepted the appointment.  Some years later Laurie Wolder, working at that time with Heals, joined the firm as Sales Director, and a senior member of staff, Chris Whittard, became Finance Director.  In 1970 Bill Ould retired, and Ray became Managing Director. In the meantime Gordon`s brother Don had retired and Gordon again became Chairman. With a whole new team in place, the firm was poised to go forward.

At management level Trevor Chinn became Chief `in house designer` and Martin Hall led the design team in the newly created Gordon Russell Contracts.  The firm embarked on new domestic ranges, along with contract office furniture designed in house and by consultant designers. After some years the decision was made to withdraw from the domestic and to concentrate on the designer led sector.

Whilst regularly exhibiting in the UK, the firm turned to overseas markets including Europe, USA and the Middle East and established workshops in Japan in order to reach the Far East.
By now, the firm had achieved international success.

In 1980 Sir Gordon Russell died at Kingcombe at 88. His contribution to British Design was recognised worldwide, and he was an inspiration to all those who had the good fortune to know him.  Ray Leigh was subsequently appointed Chairman until the firm was sold in 1986.